The Lowdown with... Alison Littlewood 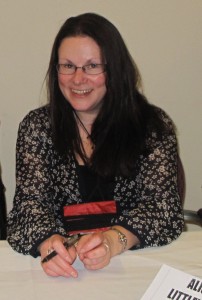 Alison Littlewood was raised in Penistone, South Yorkshire, and went on to attend the University of
Northumbria at Newcastle (now Northumbria University). Originally she planned to study graphic design, but “missed the words too much” and switched to a joint English and History degree. She followed a career in marketing before developing her love of writing fiction.
A Cold Season, from Jo Fletcher Books, was Alison’s first novel. It was selected for the Richard and Judy Book Club, where it was described as “perfect reading for a dark winter’s night.” Her second novel, Path of Needles – a dark blend of fairy tales and crime fiction – has recently been shortlisted for a British Fantasy Award. Her third, The Unquiet House, is a ghost story set in the Yorkshire countryside and has been shortlisted for a Shirley Jackson Award.
Alison’s short stories have been picked for Best British Horror, The Best Horror of the Year and The Mammoth Book of Best New Horror anthologies, as well as The Best British Fantasy 2013 and The Mammoth Book of Best British Crime 10. Other publication credits include the anthologies Terror Tales of the Cotswolds, Where Are We Going? and the charity anthology Never Again.

She now lives in a house of crooked walls and creaking doors in deepest
Yorkshire, with her partner Fergus and a dalmatian called Dexter.
She Tweets here, or find her on Facebook.

1. Tell us three things about yourself.
1. I hate talking about myself!
2. I’m from Yorkshire, and my accent has got broader the more I’ve written about Yorkshire places and Yorkshire folk. There’s no escaping it . . .
3. I’m older than I look. How much older – oh, let’s not go there.
2. What was the first thing you had published?

A piece of life writing called 'The Day I Drew God.' I did it for an online competition called TooWrite, and from there it got picked up by the Lincolnshire Echo, who plucked stories from the website from time to time. It was about the curiosity of a child being summarily squished, and it was tremendously exciting to see it in print.
3. Which piece of writing are you proudest of?

Hmm . . . the thing is, in retrospect, there’s always something you want to tinker with. But I think that would be The Unquiet House, my last novel. I started off knowing that I wanted to have it working backwards, with jumps back in time shedding light on what had just taken place in the present. I was scared that I wouldn’t be able to handle the historical sections, but once I started delving into the research I found I was immersed in it and thoroughly enjoyed the writing. I also started out without knowing how the plot would all come together, but somehow it did. It taught me to trust the old subconscious all over again. These days, I tend to think that if I’m starting to write a novel and it doesn’t feel impossible at the outset, I’m probably doing it wrong.
4. …and which makes you cringe?
Back when I first joined a writing class, I started off trying to write poems. And I thought about expanding on that, but on second thoughts, best leave it there. Ugh.
5. What’s a normal writing day like?
Get up. Feed the dog. Feed self. Check emails, do odd jobs, tidy up, spend too long on Facebook. Walk the dog. Home! Right, into the study, laptop on, notebook on hand, everything at the ready. Keep being prodded by dog, who thinks it’s his lunchtime. Make him wait. Try to ignore random pawing and big brown eyes and heavy dalmatian head resting on my knee/arm/keyboard, depending on how hungry he is. Give in. Feed dog. Right, the work of the day begins in earnest. Do words. Either lose self in them or despair, depending on how it’s going. Try not to end at the end of a chapter, because I know it’ll be impossible to get back into the writing tomorrow. Nine times out of ten, end at the end of a chapter.

6. Which piece of writing should someone who’s never read you before pick up first?
That’s actually quite a tough one, because my books have all been quite different. I’ve done horror-horror, folkloric horror, a fantasy/crime/horror cross, a more traditional ghost story and a mad zombie romp through a Mexican holiday resort. As I writer I tend to follow the ideas rather than producing the same kind of book over and over – I like to try different things and set myself new challenges each time. So I guess it’s up to the individual - they could pick up whatever they fancy!
7. What are you working on now?
It’s an exciting time, because I have two books out in September – A Cold 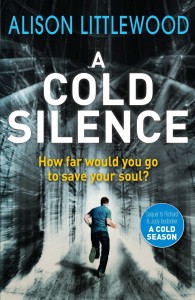 Silence, which is a sequel to my first book ACold Season, and Zombie Apocalypse: Acapulcalypse Now. Behind the scenes, though, I’m quietly getting on with my next book. I’ve really taken the plunge this time and set it in the 1800s, and it’s exploring fairy changeling lore – the idea of people being stolen away by the fairies and replaced with their doubles. It’s a scary concept – that the people you love might not really be the people you love. And there’s nothing sweet or light about these ‘good folk’ – after all, it is said that they were called that out of fear, not because it was true. I’m thoroughly enjoying delving into their dark side.