The Lowdown with... James A. Moore 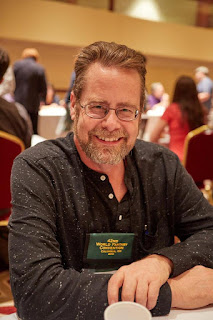 JAMES A. MOORE is the author of over forty novels, including the critically acclaimed Fireworks, Under The Overtree, Blood Red, Blood Harvest, the Serenity Falls trilogy (featuring his recurring anti-hero, Jonathan Crowley) Cherry Hill, Alien: Sea of Sorrows and the Seven Forges series of novels. He has twice been nominated for the Bram Stoker Award and spent three years as an officer in the Horror Writers Association, first as Secretary and later as Vice President. Never one to stay in one genre for too long, James has recently written epic fantasy novels in the series SEVEN FORGES (Seven Forges, The Blasted Lands, City of Wonders and The Silent Army). He is working on a new series called The Tides Of War. The first book in the series, The Last Sacrifice, is due out in January. Pending novels also include A Hell Within (a Griffin & Price Novel) co-written with Charles R. Rutledge and an apocalyptic Sci-Fi novel tentatively called Spores. Why be normal?

1. Tell us three things about yourself.
I’m a prolific writer. On a good day I break 4,000-5,000 words. My best single day was 11,700 words, edited twice, in 8 hours.
I’m a widower.
I am an exceedingly violent pacifist, which is probably at least half of the reason I write.

2. What was the first thing you had published?
The first professional sale was a comic book script for Clive Barker’s Hellraiser issue number 15, a story called “of Love, Cats & Curiosity. The first thing ever published was a review of White Wolf Games’ entire World of Darkness (at that point about seven books in the Vampire: The Masquerade game) for Game Shop News.

Dude, that like asking which of your children you love best. I did a story called “Spirits,” for a book called Four Ghosts, that came out from Cemetery Dance Publications. It’s a ghost story with no ghosts, I wrote it very, very quickly and it actually worked out the way I wanted it to, which makes me very happy. My other answer is, whatever I just finished, but that part tends to fade.

4. …and which makes you cringe?
Of my writing? The very first novel printed was called Vampire: The Eternal Struggle: House of Secrets. I haven’t even read it since I wrote it. I’ve heard it’s actually okay, but I just can’t do it. I have no idea why, seriously. Also, when I was fourteen I wrote 472 pages of a fantasy novel with absolutely no plot and the most pretentious writing ever. The evidence has long since been destroyed. 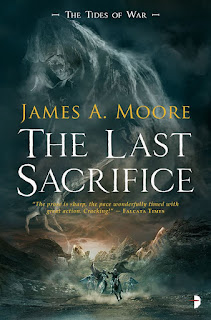 I work a full time (sometimes part time)job as a barista, so first there’s the day job and heavy levels of caffeine, then I take a break for about an hour. Then 3-4 hours of writing, a break for dinner and TV, then back to writing for a few hours That also includes handling correspondence, phone calls, and social media.

6. Which piece of writing should someone who’s never read you before pick up first?
I’m going to go with SEVEN FORGES, which I’ve had several people tell me is some of my best work.

7. What are you working on now?
I just had THE LAST SACRIFICE come out in January and that’s the first in a new series called TIDES OF WAR. I’m about two thirds of the way through the first draft of the sequel, called FALLEN GODS. I’m just reaching the cackle stage, which is when I’ve set everything up and I can get to some serious reactions and carnage.
Posted by Simon at Sunday, March 26, 2017

Labels: James A. Moore, The Lowdown