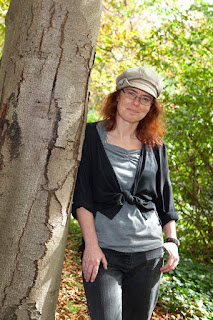 Today I've invited the awesome Janine Ashbless (aka Keris McDonald) to guest-blog about her major new novel In Bonds Of The Earth. So now I'll get out of the way and let her do the talking...

When I started writing In Bonds of the Earth, I knew I’d have to go to Ethiopia.
Well, to be precise, I knew my characters would. In Bonds of the Earth is the second in my trilogy The Book of the Watchers, an erotic supernatural thriller about fallen angels. My primary sources for the fallen angels and their offspring the Nephilim was The Book of Enoch, a truly hallucinatory text written in the 3rdt century BCE, quoted in the New Testament Epistles, but then excised altogether from the official canon of Biblical literature. For thousands of years it disappeared from Western Christianity. 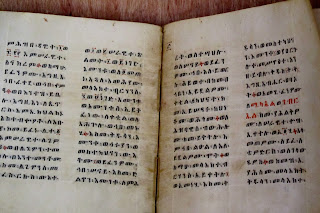 But Ethiopia kept the Book of Enoch alive. Ethiopia has been, extraordinarily, a Christian nation since the 4th century—way before anywhere in the West become officially Christian. It’s a unique, heavily Jewish form of Orthodoxy, perhaps the closest imaginable to that of the Early Church (they don’t eat pork for example, they segregate the sexes during services, and the Holy of Holies in every church is focused not on a crucifix but a copy of the Ark of the Covenant). And they do include the Book of Enoch in their canon. 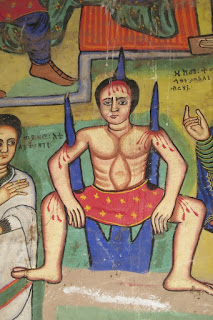 So at the end of the first book in the series, Cover Him With Darkness, Azazel has been freed from his imprisonment and vows to release all his brother Fallen Angels and wage war on Heaven.
I knew I had to take him to Ethiopia to find the first of his comrades. And I knew that that had to be Penemuel, Angel of the Written Word, just because I was so amused by this quote from Enoch:
“And he instructed mankind in writing with ink and paper, and thereby many sinned from eternity to eternity and until this day. For men were not created for such a purpose, to give confirmation to their good faith with pen and ink.”
So I booked a twenty-day tour, which was eye-opening and awesome, even if it did result in terrible food-poisoning. Hey, it’s not every author who has literally bled for their book. Rectally. 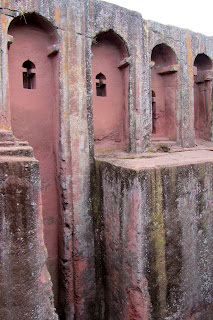 Appalling mental images aside, I found the perfect location for Penemuel’s imprisonment; the subterranean rock-cut churches of Lalibela: 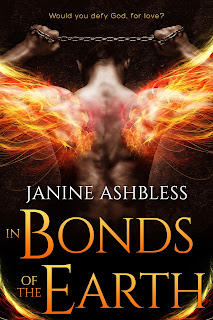 Would you defy God, for love?


“Broad at the shoulders and lean at the hips, six foot-and-then-something of ropey muscle, he looks like a Spartan god who got lost in a thrift store. He moves like ink through water. And his eyes, when you get a good look at them, are silver. Not gray. Silver. You might take their inhuman shine for fancy contact lenses. You’d be wrong.”

In Bonds of the Earth is published by Sinful Press and is due for release on March 1st, 2017.