The Lowdown with... Michael Wehunt 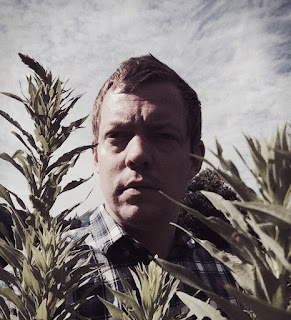 Michael Wehunt lives in Atlanta, Georgia. His short fiction has appeared in Cemetery Dance, The Dark, The Mammoth Book of Cthulhu: New Lovecraftian Fiction, The Year's Best Dark Fantasy & Horror, and Year's Best Weird Fiction, among others. His debut fiction collection, Greener Pastures, was published in 2016 by Shock Totem Publications.

1. Tell us three things about yourself.
i. I was born in Georgia, just south of the Appalachian Mountains, and while I ended up 60 miles away in Atlanta, many years later I have not figured out how to leave the South yet.

ii. I once attempted stand-up comedy…three times. I’m still not sure why, but it was a lot of fun and it did a world of good for my mild stage fright. It also greatly helped my more general fear of “performing.” I’m putting that word in quotation marks to broaden it, and because I really believe getting up there and doing that was the first step toward allowing myself to try writing fiction.

iii. There are Prohibition moonshiners in my family tree in north Georgia. Following a police raid and the destruction of a family distillery in 1916, some equipment and a great deal of whiskey ended up in a nearby well. My great-grandfather died trying to rescue his son and his cousin, who had both tried to recover equipment from the well. All three, one at a time, were overtaken by powerful fumes. It’s a tragic piece of local lore in the area.

2. What was the first thing you had published?
My short story “Notrees” was published in Innsmouth Free Press in June of 2012. A piece of trivia about this story: It’s very, very obviously Lovecraftian, but I had yet to read a single thing by Lovecraft. That tells you how pervasive cosmic horror has been in recent years and how well others play in it. I would never publish it again, but I’m proud of the fact that I haven’t yet had a particularly strong urge to remove the link to “Notrees” from my website’s bibliography page. But now that I’m mentioning it here, I find myself wanting to reread it with a critical eye…

3. Which piece of writing are you proudest of?
My story “The Devil Under the Maison Blue” (originally published in The Dark in 2015) might come out on top. I tried to look at several difficult things at once using only 4,000 words, and somehow it all came together. It also has been made by others into my proudest moment. It was chosen for Year’s Best Dark Fantasy & Horror 2016 by Paula Guran, Year’s Best Weird Fiction 3 by Simon Strantzas, and it was how my agent found me. So it will always have a special place in my dark writer heart.

4. …and which makes you cringe?
My third published story, “The Anything Cloak.” I haven’t read it in quite some time and would probably be mostly okay with it. It’s a little clumsy but not embarrassingly so. But not long after I wrote it, I read Joe Hill’s “The Cape” and realized the central conceit and theme (while somewhat different) had been done a lot better already. 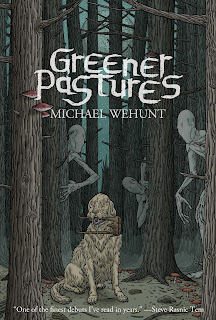 If it’s a really great writing day, I’m able to take half an hour during my lunch and peck away at something. But a normal day is just me sitting down for one hour in the evening. My rule is five evenings a week and hopefully a good bit more on Saturday. No writing on Sundays. The crucial thing for me is routine. I put on a record (field recordings, ambient or drone, some unobtrusive classical) and try not to hear the ticking clock.

6. Which piece of writing should someone who’s never read you before pick up first?
I have to go with “October Film Haunt: Under the House,” which is original to my collection, Greener Pastures. (I would pick one exclusive to the book, wouldn’t I?) Although it’s more intense weird horror and less character-driven, I feel extra-safe choosing that one. I had a lot of fun taking risks with the concept of horror fandom and the “found footage” genre, and of all the stories in the book, it’s been singled out most often as the favorite of readers.

7. What are you working on now?
I’ve basically shoved everything off my desk in order to write a novel for the first time. Someone told me that you learn a lot about yourself while writing a novel, and now that I’m around the 30% point, I can already agree with that. At any rate, I’m past the point of no return and still nervous and excited to see how it all plays out.
Posted by Simon at Monday, January 30, 2017